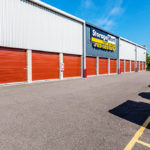 Many people tend to buy a lot of stuff they may or may not need. They then proceed to fill up their homes with the stuff and store some of it in the garage. The garage ends up so full no car can be parked in it. Rather than get rid of some of the stuff a fair number of people decided to rent storage units in a facility.

There are other reasons people use storage facilities, though. Those in the industry say that there are the “4Ds of life” which account for why their facilities are used by people. These four Ds are dislocation, downsizing, death, and divorce. According to Wikipedia this has resulted in somewhere between 44k and 52k storage facilities across the United States.

The people of ancient China had access to public places where they could store their stuff. In the United States, the concept of self-storage started in the 1960s. The first chain of these types of facilities was founded in Texas. Storage facilities really took off in the 1990s when the demand for public storage outgrew what was available. As a result, more than 3,000 of these facilities began to be established each year up through 2005 when the pace slowed down a bit.
Self-storage units come in a variety of sizes to meet the needs of consumers. The smallest ones are 5×10 which is roughly the size of a big closet. These tend to go all the way up to 20×20 storage units which are the equivalent of a two-car garage. They generally don’t have any windows and are made of metal and/or concrete. They include a lock which can only be opened by the person who purchased the unit.

These types of facilities sometimes have security guards watching over them to make sure none of the units are broken into. Some places have alarms on each individual unit so if someone is trying to break in the guard will know precisely where the problem is. These facilities can also have outdoor storage set aside for boats and motorhomes.

Despite the security, some people still try to break into storage facilities. An example of this is shown in this article that was recently written. Two men in Taft, California, broke into a storage unit and stole a number of items. They stole several items and escaped, one in a Ford truck and other on a motorcycle. The cops recognized the truck on surveillance video, though, as they had dealt with its driver before. He was soon arrested and all of the stolen property was recovered.