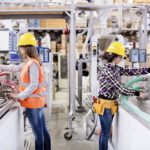 For manufacturers of industrial equipment, everything has to have a specific strength and stability to withstand a higher level of stress and environmental forces usually experienced in a large manufacturing plant. The basic understanding between a screen and a bolt is very critical at this point. Though there are some similarities between the two, there are unmistakable differences. Any machinist’s who follows a standard for the use of bolts and screws knows the intended purpose must be considered for either the bolt or the screw.

A bolt is essentially used in the assembly of unthreaded components. A bolt also uses the nut as the other necessary component in the assembly process. There are many kinds of bolts and each one is manufactured according to a ISO standard which is used by all manufacturers who make and design different kinds of bolts. There are as many as 16 types of bolts which are being manufactured. Any Shoulder Bolts are a specific bolt having a broad smooth shoulder, but a distinct male narrow threaded end. The bolt is used in the attaching of loose parts on the long smooth shoulder, while the narrower male threaded end is used as a clamp or fastener.

In Contrast to Screws

A screw is used in materials that have a built in thread that receives the screw into itself. The screw also is used to inject the screw into the receiving material and cuts out a path for itself by its threaded circumference. Unlike the bolt, the screw doesn’t have a smooth shoulder of any kind other than the part called the cylindrical shaft which also contains its self-possessed thread.

Screws are used for fastening one component to another. A screw that fastens makes the bond between the two united components secure so as to reduce all looseness from either component. The screw acts as a riveting agent between the two components. In industrial plants the use of bolts and screws are vital to the success of the manufacturing process. A plant is required to have ISO standard checkpoints throughout the year to check for compliance to OSHA rules and regulations, which insures the safety of the employees in the manufacturing process.

When a bolt or screw is loose in a highly moving machine there is higher degree of an accident or physical harm done to employees. Bolts can fly and crush, maim or harm anyone in the trajectory of the bold or screw. This is the responsibility of the plant foreman to schedule regular inspection of all machines that have moving parts to secure all bolts and screws that may have been loosened by vibrations of other moving parts.

Every manufacturer is required to regularly inspect the floor plant to secure any harmful equipment or loose things that would prohibit a safe working environment for the workforce. If during a regular OSHA inspection bolts, machinery, or other equipment used by its employees are found to be incapable of use by an employee because of damage or material fault could be fined by OSHA.