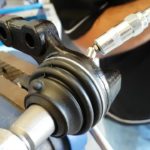 The art and engineering science of metal forming dates back thousands of years. Ever since mankind left behind the stone age and started working with small amounts of tin and copper, the craft of forming simple tools, structures and implements from metals has been a central aspect of the formation of civilization. Today metal forming includes complex processes that include sheet-stamping, rolling, cold-forming, hot-forming, wire-drawing, hydroforming — to name just a few. Most of these functions involve pressing metals together at high pressure and often at high temperature. Most often some kind of lubricant is needed to counter the effects of friction between metals. They also protect metals from the tortuous machinations needed to make a specific product. That has given rise to whole classes of metal forming lubricants. These come in literally thousands of varieties and formulations.

Think of the oil that works in your car engine. Without refined, premium grade oils a car engine would heat up, seize up and/or blow up. Oil is the lubricant needed to keep all of the moving metal parts in s car engine functioning smoothly. Oil lubricants control the temperature of a car engine, prevent corrosion, abrasion and also allow all parts to work smoothly together. The same is true for factories and machines that are forming metals and making all kinds of products. Just look around and notice anything made from metal. No matter what it is, it had to be bent, shaped, pressed, processed and handled in many ways before it became a completed product.

In general, there are four categories of lubricants used in metal forming. They are water-based, oil-based, synthetics and solid film. (The latter are sometimes called dry film). The water-based lubricants contain emulsions or micro-emulsions. They are soluble, meaning they break down in water. But that characteristic makes them excellent for use as cooling agents. They are used for high-speed applications. It is interesting to note that, although water-based formulations do not really lubricate, they are still categorized as lubricants because of how they can be used in metal-forming processes.

Oil-based lubricants are just that — highly slippery and lubricant! They have long usability life spans, but eventually break down with heat and wear. Again, think of the oil in a car which needs to be changed periodically. A limitation of oil lubricants is that may lack what is called additive solubility.

Synthetic lubricants were invented to deliver higher cooling capabilities than oils derived from organic sources. They can also last much longer before breaking down with heat and use. Some may also be emulsified with water. The invention of synthetic lubricants has greatly increased the range an capability of metal forming technology. So what is a solid film or dry lubricant? Well, not all lubricants are liquids. Some consist of materials, such as graphite, combined with water or oil. They are helpful in extreme conditions of high temperature situations or when a machine employs a low shaft speed, for example. They are also used in very high pressure applications.